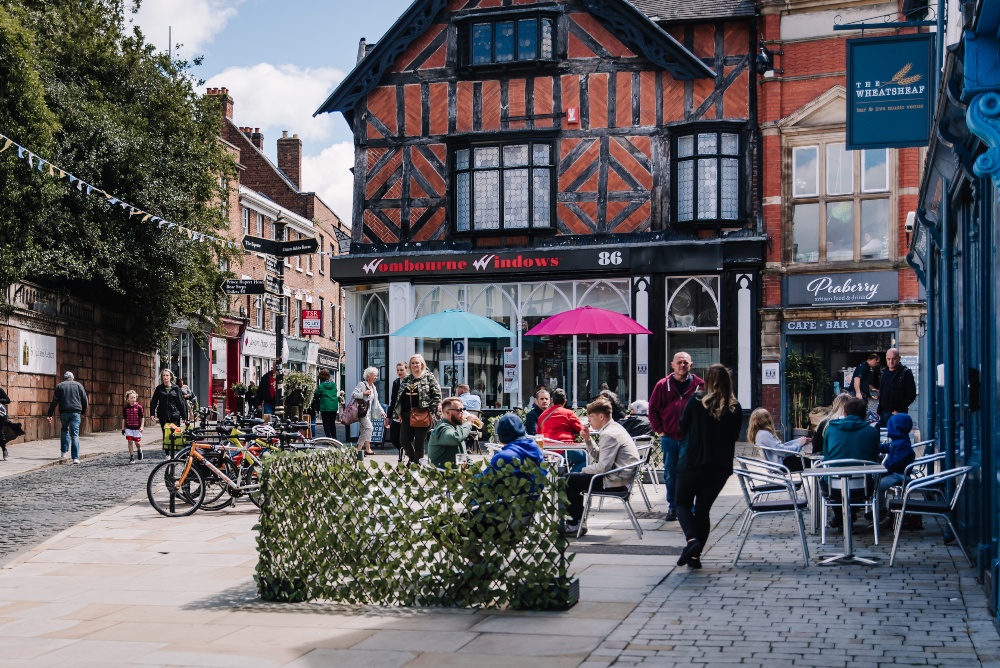 A survey is being launched to gather people’s views on how Shrewsbury town centre’s traffic arrangements have worked over the summer.

Since mid-June, when shops were allowed to reopen, High Street and adjacent streets have been closed to vehicles to allow room for social distancing, following advice and guidance from central government and Public Health, and for businesses to use the outside space for seating customers.

Shrewsbury Recovery Taskforce, made up of Shropshire Council, Shrewsbury Town Council and Shrewsbury BID, is now asking for feedback from the public about what has worked – and what hasn’t.

Councillor Peter Nutting, leader of Shropshire Council, said: “Shropshire Council has been working incredibly hard, in tandem with colleagues in Shrewsbury Town Council and Shrewsbury BID, to make the town centre safe and welcoming for people in the wake of the Covid-19 outbreak.

“The most obvious change has been closing High Street to traffic during the day, and making Wyle Cop one-way, so all inward traffic has had to go around the inner ring road or along Town Walls, St John’s Hill and Claremont Bank.

“We are acutely aware of the impacts of increased traffic on Town Walls and adjacent streets and representatives from the Recovery Taskforce have been in regular dialogue with residents in recent weeks to hear their concerns.

“This survey is an important part of the review of traffic measures this summer and will help us to decide steps we might take in the longer-term to improve transport and pedestrian movement in and around Shrewsbury.”

The survey can be found by clicking here.

Leader of Shrewsbury Town Council, Alan Mosley, said removing traffic had improved the atmosphere in the High Street and surrounding areas and he had heard many people praising the move. However, any future long-term measures had to be carefully considered from all points of view, he said.

“I would urge everyone to have their say – whether they live or work in the town centre, or just visit occasionally,” he added. “This is a chance to learn from the previous three months and we want to hear everyone’s views.

“By bringing in these changes we have carried out a really useful experiment in increasing pedestrianisation beyond the Pride Hill area, which we can use to inform any future decision-making linked to the objectives of the Big Town Plan.

“It is vitally important that as many people as possible complete this survey so they can tell us what they think.”

Seb Slater, executive director of Shrewsbury BID, which works on behalf of more than 500 businesses in the town centre, said: “We’ve seen strong footfall in the town centre over the summer, with Shrewsbury consistently performing well above UK town centres levels since the national lockdown was eased.

“We want to hear directly from people working in businesses in the town centre about how the summer has gone for them and to hear their views on the changes that have been made.

“We are also asking visitors and customers to share their experiences of the town centre this summer to help shape the strategy for access and movement in Shrewsbury in the longer term.”

The survey will take around 10 minutes to complete and respondents can opt into a prize draw to win one of three £50 vouchers for a Shrewsbury business of your choice.